Pitch foundations: Getting ready to pitch your startup

These are not the same pitch slower. They are different pitches aimed at getting a specific thing to happen. That is, they are pitches in different contexts.  And they all have the same overall task as a goal: To get to the next meeting.

Additionally, they all have the same foundation at the core. When you work on your Lean Canvas, you are working to illuminate that core business model.  Let’s take a look at how that might work.

For the 30 second pitch, you are trying to provide enough of an overview that you get people’s attention. If we look at the Geoffrey Moore framework out of Tor Grønsund’s post:

Some of this looks remarkably like the Lean Canvas: 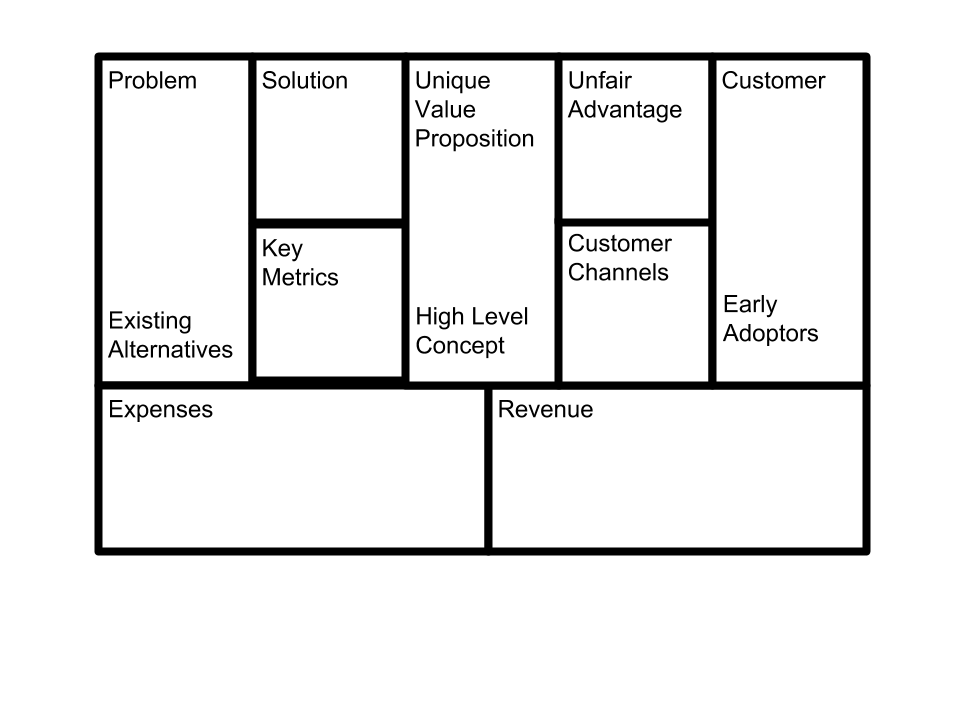 This provides a little more detail on the company and how it fits into the market place.
However, there are two things that are missing: A request at the end and an attention getting mechanism at the front.

Where we have clarity in the business model, the task of pulling together an appropriate and effective pitch becomes much easier.   Because you will be connecting with Investors multiple times as you engage in the process of seeking investment, it is always good to have a way to mix up the story a bit as well. Saying the same pitch over and over again, without updating and evolving it ends up being  a signal to investors that you are not learning along the way. So please expect to be reworking and revising the various pieces of your pitch along the way.

Hopefully, this will help you create a specific framework that gets you started on an effective pathway to doing a good pitch. Practice this pitch process every day, with different people, and learn how it evolves and how to make it more effective. The key is to be remarkable. That is, to have other people talking about you after you have left. Typical early stage pitch sessions have a dozen or  more companies presenting at the same time. Just given Human short term memory structures, only 3 or 4 of the companies presenting will be remembered. What will you do to be remarkable enough to not only be remembered, but to have the investors telling your story for you?

Everyone on your team should understand your core business model and be able to give a pitch at a moments notice. In a startup, everyone is a sales person.
Posted by John Sechrest at 3:00 PM No comments:

I regularly get people contacting me to talk about their startup and the work they are doing. Frequently they are very very busy doing startup-y things like managing their team, organizing their tasks, raising money... But strangely, not really doing any significant Customer Development. I have run several experiments now where I have made them an offer to take a small time-out, and to run a Lean Startup Experiment to do just one Build-Measure-Learn loop in a formal and transparent way. My experience is that there is serious significant resistance among entrepreneurs to really talk to real customers. 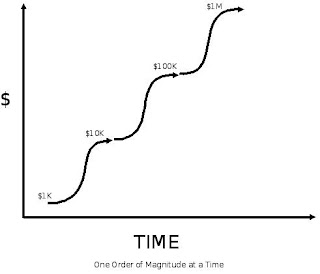 As a person who believes deeply in the Lean Startup methodology, I would start the conversation urging you to stop building your prototype. Clear the space for you to do significant customer engagement.

The Lean Startup idea is that you put Customer Development before Product Development. That is you talk to , understand and adapt to a customer base, discovering and validating your customers before you build things.

You have three main risks:
1) Technical Risk - Can it be built
2) Market Risk - Should it be built
3) Execution risk - Can my team build it

These are in order. Chances are, you do not have technical risk.
And Chances are that you have not talked to enough customers to resolve that there are really customers who have a real problem that are really willing to pay you. (Note that there is a significant difference between the 98% of people who are cheerleaders that tell you happy thoughts and the 2% of customers who really really really are ready to pay you now to solve a problem)

You need to find 100 customers who really really really want to pay you now to solve a problem; before you take one more step on building the product, find those 100 people.

I recommend that you read these three books, in order:

And I recommend that you get the Startup Owners Manual by Steve Blank, and strive to read one page a day. Keep reading pages one at a time until they start falling into place.

This would allow you to get focus on this Customer Development before Product Development.

If you are ready to take a leap into a Customer Development experiment, take a look at the work of Adam Berk ( @adamberk ) as outlined in http://www.oomaat.com/2016/10/just-one-lean-experiment-to-progress-to.html

Standups every 90 minutes at a Startup Weekend? Why?

Tonight, I am facilitating another Startup Weekend. It will be my 55th startup weekend event. When I do a startup weekend, I try to engage the group in regular standup status meetings every 90 minutes.

Startup Weekend is a business sprint. Trying to get from idea to revenue in a weekend, with a group of strangers. The surprizing thing is that 11% of these teams formed over the weekend are alive a year later moving money. ( I suspect that the teams made up of people who have been to several startup weekends because we have such a high return rate for participants. )

I just read the article by Jason Fried on Medium - Status meetings are the scurge - https://m.signalvnoise.com/status-meetings-are-the-scourge-39f49267ca90#.cn3v2wyb9

And I am sure that the Technical coders in the room feel somewhat unhappy about all the interruptions. So.... Why would I want to continue this practice?
* Help people get to know each other

It is frequent that teams hole up and never get to see others. By having to stand together, they at least get to see other people and to engage with them. All 100+ people stand up and circle up to do the standups. When they work right, 13 teams can be done in 8 minutes.


* Use teams progress to focus the work of other teams
When teams report out things that the other teams have not thought of, often they are able to get those things one the task list and going much much faster.

* To break attention to "too big to do" tasks into smaller pieces
It is frequent that people have big fuzzy ideas and have not figured out how to drive them down to small manageable tasks. By breaking things into very small sprints, we are able to get people to focus on things that move the ball forward faster. Instead of being lost in the midst of a fuzzy swamp of ill-formed ideas.

* To force people to physically move and increase productivity
When people get up, move, push the blood around, they come back a bit more energized and a bit more focused. Without these breaks, people tend to get a bit fuzzy headed. A weekend is a long sprint without breaks.

* To enable people to interact between teams more over the weekend
By actually physically seeing everyone together, it creates many more relationships over the weekend, than when people are only talking the whole weekend to their 6 team members.

* To help team leaders be seen as leaders
By having the team leaders report out, we help them be better known in the community and help them reenforce their role on the team.

* To build a sense of urgency
If every task you are doing has to be small. Think Pomodoro (25 minute tasks), then the need to do something now gets stronger. The whole "No Talk, All Action" motto is focused at this idea of doing instead of discussion. If you can't decide in 5 minutes, flip a coin. If you can't get the task done in 25 minutes, break it up into smaller pieces.

With Pomodoro (25 minute sprints) and a team of 8 people, with 20 hours of real working time, you should be able to get 8 * 40 = 320 tasks in the weekend. For many this is more progress than most people make in a month.

Most people have habits that make it hard for them to make rapid progress. By doing standups, we drive some of those habits away , at least for a weekend.

This weekend, I will experiment with using Slack + Trello as a tool and see if this helps any of these areas. Perhaps there are some ways to get people to be more effective with less interruption. However, moving your body and meeting other people are in some cases more important that staying in the current task that is taking way way too long to be effective.
Posted by John Sechrest at 2:45 PM No comments: